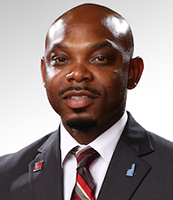 Bernie Coaxum comes to Newberry after one season as an assistant at Pfeiffer. During the 2016-17 season, Coaxum played an important role in helping the Falcons compile a 26-5 overall record and win the Conference Carolinas regular season championship. In addition, the Falcons were ranked nationally in the NCAA Division II polls and received a bid to the NCAA Tournament. Coaxum's main role as the defensive coordinator helped the Falcons set a school record in steals at (391) which ranked 2nd nationally in NCAA Division II. The Falcons were also ranked No. 1 in the country in forced turnovers at (725) with an average of 23.3 per game.

Prior to Pfeiffer University, Coaxum had three years of experience as a head coach at the high school level. He spent two years at Coastal Christian Prep in Mount Pleasant, S.C. and one at Palmetto Scholars Academy in North Charleston, S.C. His 2012 team at Coastal Christian reached the South Carolina Independent Schools Athletics (SCISA) Class A state championship game and posted a 28-4 record. Coaxum was named SCISA Region IV Coach of the Year.

A native of Mount Pleasant, S.C., he played collegiately for one season at Anderson University for coach Doug Novak before transferring to Division I College of Charleston.

During his time at College of Charleston, Coaxum was on a team that defeated the University of North Carolina and won the 2002 Great Alaska Shootout with victories over Wyoming, Oklahoma State and Villanova. He was a member of the 2002-03 Cougars that finished with a 25-7 record and spent several weeks in the AP Top 25.

He is a graduate from the College of Charleston with a degree in communications.