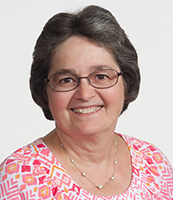 When you call the Newberry College Music Department, you are most likely to hear the voice of Mrs. Debbie Jarman. Debbie grew up in a small Southern New Jersey town named Woodstown. She is a graduate with an Associates of Arts degree of Goldey Beacom College in Delaware. After moving to Newberry in 1983, she served 11 years as an Administrative Assistant for a Newberry church. In 1998 she joined the Newberry College staff as Administrative Assistant to Athletics and Physical Education Department. In 2004 Debbie became a Financial Aid Counselor and in 2008, an Accounts Receivable Coordinator. Beginning January 2013 she joined the Newberry College Music Department becoming our Administrative Assistant. Reflecting on her 21+ years of dedicated service to our College, Debbie remarked “I have thoroughly enjoyed the interaction between the students and their families as well as the staff. This is a great college community to work in.”

Debbie and her husband Mike have two married sons, Henry (Kayse) and Willie (Kayce). Henry and Kayse are graduates of USC. Willie and Kayce are both Newberry College graduates and work in South Carolina schools.