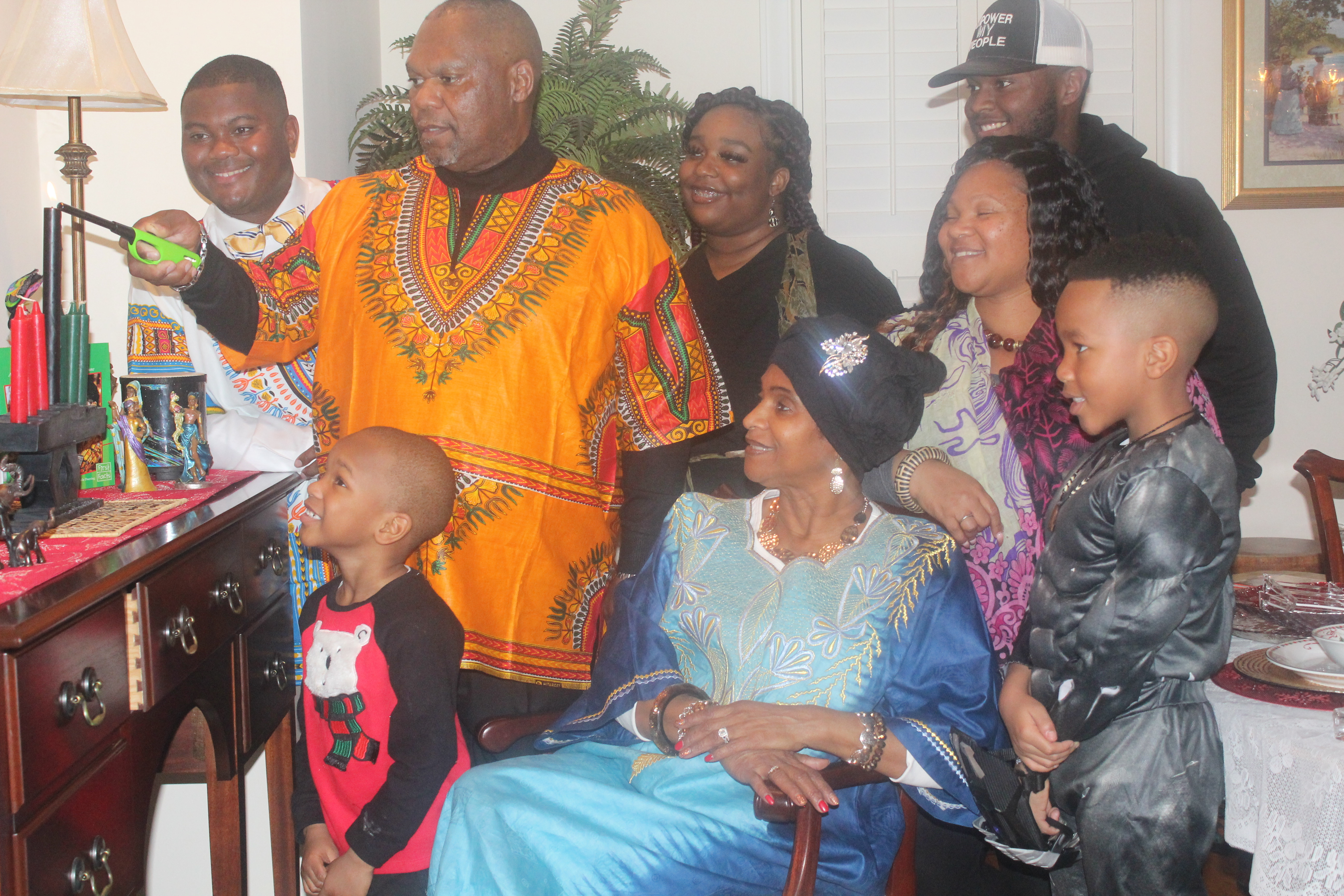 Today, the Kinard family of Newberry, South Carolina, will mark the beginning of Kwanzaa, a seven-day celebration honoring shared culture and heritage among Americans of African descent. The holiday begins each year on Dec. 26 and culminates on Jan. 1.

“Celebrations often include singing and dancing, storytelling, poetry reading, African drumming, and of course, traditional meals that have been passed down through generations,” said Newberry City Councilman Carlton L. Kinard ’16.

Kwanzaa began as a holiday in 1966 with Dr. Maulana Karenga, of California State University. Karenga sought to bring the African American community together in the wake of civil unrest across the United States, particularly in the Watts neighborhood of Los Angeles. The traditions are based in the Swahili language, and each of the holiday’s seven days is defined by a guiding principle for discussion and reflection.

The Kinards began celebrating Kwanzaa in 2010, and they are among many who celebrate the cultural holiday alongside Christmas.

Each principle is represented by a candle held by the kinara (candleholder), which is placed on a mkeka, a straw mat. One ear of corn, called the vibunzi or muhindi, is placed under the kinara for each child in the family. On the first night of Kwanzaa, the center black candle is lit, and on each subsequent night, another candle joins it, three red and three green, lit in alternating order. Other Kwanzaa symbols include a mazao (fruit basket) and a kikombe (unity cup), which are also placed on the mkeka. 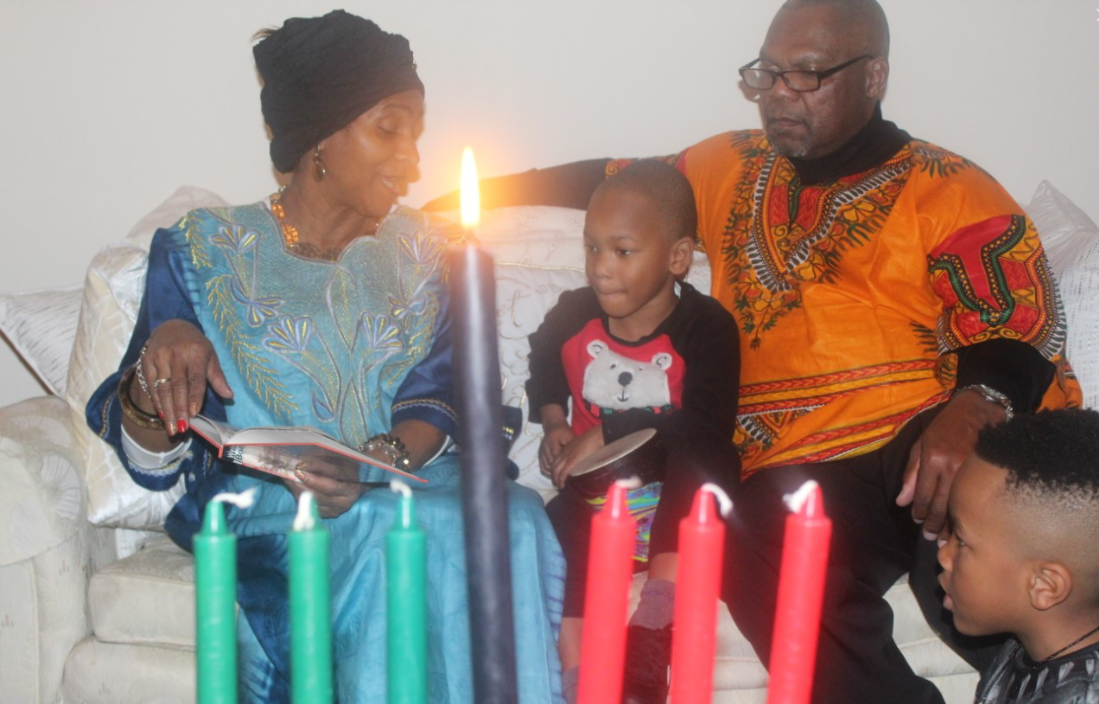 “It is tradition when greeting family members, you must start out by saying ‘Habari Gani’ (‘what is the news?’). The appropriate response is to say the name of the principle for that day,” said Kinard.

“Cooking and eating have played an important role during the Kwanzaa celebrations,” said Kinard. “Many recipes are prepared that have been passed down from generations. Dishes such as my Grandma B’s famous sweet potato pie, also black-eyed peas, rice, collards, a smoked turkey, and dressing (not stuffing)!

“Another tradition that has been rooted in the African American culture is dancing. There’s nothing more satisfying, and needed, after eating a delicious meal than working off that turkey while dancing to your favorite old school tunes and African drumming. Many African American households own an African drum that is more likely used as decoration in the house. However, during the Kwanzaa celebrations, it is often used for its original purpose.

“Many of the traditional dances are from our African heritage, however, we have incorporated some of our African American dances into the celebrations as well, such as the Soul Train Line, the Electric Slide, the ‘Wobble’ and so much more.

“As a musician, I find joy in performing different genres of music on my trumpet as well,” added Kinard, a music program graduate.

“One of my favorite traditions during the Kwanzaa celebration is storytelling. Listening to the elders in the family, like my grandmother and great aunts and uncles, and allowing to them tell old stories about their struggles and successes during their lifetime is a highlight during Kwanzaa.

“Allowing the elders to share the family history is a way young people like myself have a better understanding of my family roots. During the pandemic, we have been able to start a family tree activity where we are doing some research on how far we can go back in time to find out about our ancestors. It has been a great experience for our family,” said Kinard.

“Gifts are often exchanged for Kwanzaa, but are usually handmade rather than store-bought. The focus of the gift-giving is about creativity and commemorating a shared history, rather than on receiving a bounty of toys. Some of the Kwanzaa activities often include making traditional crafts, such as straw baskets, painting, jewelry crafts and kente cloths, which are then given out to relatives as the celebration progresses.

“The celebrations and traditions will look a little different this year during the COVID-19 pandemic,” Kinard said. “However, we are blessed to have our family still among the living. During the Christmas and Kwanzaa holiday season, our family will celebrate many of our traditional festivities online, via Zoom or some other virtual outlet.”

“The festivities are enjoyed in your home, from embracing the full week to just devoting one evening to the holiday. Remember that the focus is on being together as a family and connecting the present to history and the future. As many Americans are staying home this year during the COVID-19 pandemic, I ask that you spend an evening with your family and discuss the principle of the day and how your family can achieve that principle on a daily basis collectively,” said Kinard.

“The most important part is to create a holiday tradition that resonates, delights, and inspires your family.”