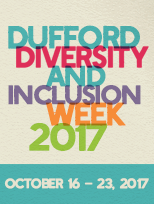 The fiery images of Charlottesville and the blistering grief that followed have sounded a wake-up call, and one small college in South Carolina continues to answer.

In the hope of healing the wounds of the past—and lowering the fever of racism that threatens to cripple our future, Newberry College will host the fifth annual Dufford Diversity and Inclusion Week Oct. 16 – 23, 2017. (See schedule of events below).  All events are free and open to the public except where noted.

“After Charlottesville, this should be on the forefront of everyone’s mind,” said series sponsor William Dufford. “We encourage the community to join us. This topic should be of particular interest, I think, to educators and youth, of course, but everyone has a stake in social justice. Everyone.”

Dufford Diversity and Inclusion Week is part of Newberry College’s ongoing efforts to promote appreciation for diversity and create a culture of respect. The program promotes an appreciation for the differences that give individuals a sense of identity – among them religion, sexual orientation, disability, gender, age, ethnicity and race.

Of particular interest in the wake of the Charlottesville tragedy, is the keynote presentation by Southern Poverty Law Center. Founded in 1971, SPLC’s innovative legal strategies crippled many hate groups and white supremacist organizations. The Southern Poverty Law Center continues to monitor hate groups. Its publication, “Teaching Tolerance,” is used in classrooms across the nation to promote respect and reduce bullying, particularly of children with differences.

Dufford Diversity and Inclusion Week is sponsored by educator and social justice activist William Dufford, Ph.D., of Columbia, S.C. Born and raised in a segregated South within a block of Newberry College, it never seemed out of the ordinary to Dufford that he attended an all-white school, was captain of an all-white basketball team, was taught by all-white professors or that the only African-Americans on campus served food or swept the halls.

Dufford’s eyes were slowly opened to the injustices that were a fact of life for most African-Americans when he served with African-American men in the Navy and as he came to know African-American students during his doctoral studies at the University of Florida. With awareness came a desire for change and Dufford began to grow beyond his roots to become a champion for social justice.

The week-long series will close with a documentary video and book signing about Dufford’s evolution from a “good old boy” at all-white schools into a champion for social justice in education, working to ensure all South Carolinians have access to the transformational power of a good education.

Dufford’s work is the subject of a new book, “My Tour Through the Asylum: A Southern Integrationist’s Memoir,” published by USC Press. Authors Aida Rogers and Sally McInerney have compiled recollections from people who walked with Dufford on the journey of working through differences toward a common good. The book title is based on the infamous assessment by 19th century statesman James Louis Petigru that South Carolina was “too small to be a republic and too big to be an insane asylum.”

“Each year, we host a variety of stimulating events that we hope will help students, faculty, staff and the community broaden their perspectives,” said Dr. Peggy Barnes-Winder, director of Diversity Education at Newberry College. “Our goal is to help participants develop a greater understanding and appreciation of the unique differences of our humanity and the values and beliefs that form our individual identities.”

World-class Paralympic sprinter Jerome Singleton Jr., and former Director of Public Safety for Orangeburg, S.C., Wendell Davis ’81, will speak on some of the obstacles they have overcome over the course of their careers.

Lecia Brooks, Outreach Director for the Southern Poverty Law Center, an organization founded to combat hate, intolerance and discrimination through education and litigation, will discuss SPLC’s history, landmark legal cases and describe current efforts for equal justice. She also will discuss SPLC’s internationally recognized efforts to track and expose the activities of hate groups and the nativist movement and monitor militia and other extremist antigovernment activity.

Martial Artists and Acrobats of China

Danny Gardner, author of “A Negro and an Ofay,” will speak at the Newberry Opera House about his novels and his career as an author, comedian, actor, director and screenwriter.

Screening of the documentary video featuring Dr. William Dufford’s work as an educator and administrator who led the integration of the Sumter school district. Dufford will sign copies of his newly published book,” My Tour Through the Asylum: A Southern Integrationist’s Memoir.”