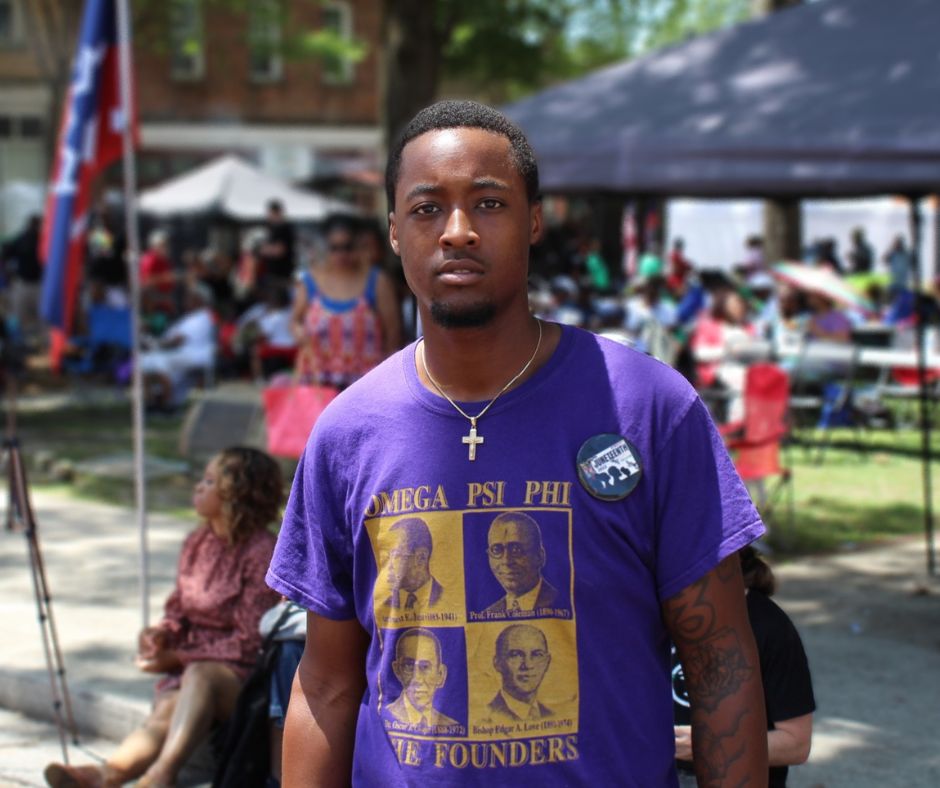 NEWBERRY — Jarious Singley wipes his brow as he crosses brick-laden Boyce Street, keeping step with the beats emanating from Memorial Park to his left. The early-summer sun beams warm and bright on the tents and through the branches, where celebrants fan in time with the music. This Juneteenth, he thinks, will not only be a celebration of historic freedom, but a step toward an even brighter future for his community.

Singley, a Newberry native, just finished his first year at Newberry College, where he is a sport management major and a member of Omega Psi Phi fraternity. He is using his connections and his love of community to get his “Grades Up, Guns Down” initiative off the ground. The initiative was prompted by the May 21-22 shootings of four Newberry teens, just a few blocks and hours apart.

“One of them was actually a relative, and a couple of them I coached in football, so it kind of hit home for me,” said Singley. “So, I just wanted to stop talking about it and get to work about it.”

For him, solutions come in the form of education.

“I just wanted to start something, exposing kids, especially young kids, to the importance of school and going into the workforce, as soon as I could, because we’ve got to start young,” he said. “You don’t have to stay in the streets. You can be from wherever you’re from, but you don’t have to be a product of your environment.”

Singley said that working to keep young people in school, helping them find their passions, and preparing them for successful careers can prevent violence and the senseless loss of life. That’s why he organized a college and career fair, which coincided with Newberry’s second annual Juneteenth celebration. Though not directly related to the holiday, Singley said the festival offered a prime opportunity.

“It’s the first year, and it’ll grow from here, but we just wanted to start off somewhere and it turned out pretty good,” he said.

In addition to Saturday’s fair, Singley said a mentor group meets at 10 a.m. each Friday at Genesis Hub in Newberry. Everyone is welcome to attend, especially middle and high school students. He credits the idea to fellow Newberry College alumnus and Newberry native Amir Cromer ’22.

“These sessions will include real talk, life skills and positive role models and free lunch in a safe and open environment,” said Cromer.

When asked what he says to get young people involved, Singley said, “I don’t have a pitch. I just use my personal experience. I’m not from the best of neighborhoods, but it’s just all about what you want to do. You’ve got to make your own way, but when you’ve got the resources there to help take the right option, I can help get you in places to succeed. That’s my main goal.”

Singley would like to thank the City of Newberry and Dr. John Lesaine '07, assistant dean of academic affairs at Newberry College, for their support thus far.

For more information on how to get involved, email Jarious.Singley@newberry.edu.