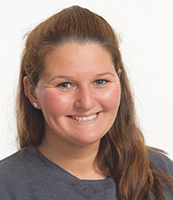 Department:
Office of the Director of Athletics

Liz is no stranger to Newberry, serving as an assistant coach for the field hockey team since August of 2019. In her first season, the Wolves had their best season in school history. Newberry won a school-record 13 games and earned the second seed in the South Atlantic Conference Carolinas Championship while placing six players on the All-Conference teams. The Wolves also defeated Limestone and Lindenwood for the first time in school history and defeated 10th ranked Indiana University of Pennsylvania.

Doherty was a four-year starter on the field hockey team at the State University of New York at Geneseo, where she was named SUNYAC All-Rookie and Second Team All-Conference as a freshman. She finished her college career with 11 goals, six assists, and 11 defensive saves. After graduation, Liz served as a graduate assistant at Nichols College while pursuing her Master's Degree in Business Administration.