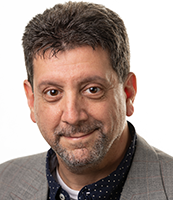 Chair, Department of Arts and Communications, Professor of Theatre and Speech

Professor Gagliano currently serves as Chair of the Department of Arts & Communications, Professor of Speech & Theatre, Digital Marketing Program Coordinator, and Coordinator of the COL 113 Academic & Career Preparation course for freshman students. Prof. Gagliano has produced, directed, and acted in many Newberry College Theatre productions since 1994. He has held multiple officer positions in the South Carolina Speech & Theatre Association including President, College and High School Festival Host, and Administrative Coordinator – a position he held for 20 years. For the Southeastern Theatre Conference, Prof. Gagliano has held numerous Chair positions, and served as Vice President of Services from 2015-2018. He has received many honors for his work on campus and off such as the SCSTA Communication Arts Award (2005 & 2015), SCTA Teacher of the Year Award (2005), Newberry College Boyd Professorship for Teaching Excellence (2006-07), Newberry College Carter Professorship for Selfless Giving (2009-10), and the National Society of Leadership and Success Excellence in Teaching Award (2014).

Prof. Gagliano lives in Chapin with his daughter Alyssa. His son Paul is completing his undergraduate degrees as part of the dual-degree program in Mechanical Engineering with Clemson University.