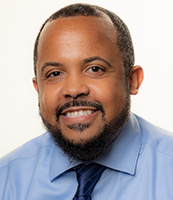 Dr. Ramon M. Jackson earned his B.A. and M.A. in History at The College of Charleston and completed the doctoral program in History at the University of South Carolina in 2019. While completing his dissertation on the Long Black Student Movement in South Carolina, Dr. Jackson served as co-historian of Columbia SC 63: Our Story Matters, a landmark public history initiative that commemorated the 50th anniversary of the national Civil Rights Movement by reexamining the Black freedom struggle in Columbia and other sections of the Palmetto State. Dr. Jackson and other project leaders organized lectures, exhibits, wayside tours, and other public programs that conveyed the deeper, multifaceted story of the struggle for freedom and justice in South Carolina and its dramatic impact on our nation.

Dr. Jackson’s scholarly interests include the intersections of race, higher education, and student activism in the American South during the 20th century. He also studies sport history and how race shapes American perceptions of childhood. Dr. Jackson joined the Humanities Department faculty in the fall of 2021. He currently teaches the introductory U.S. History survey and special topics courses on America during the World Wars, the Civil Rights Movement, and the Post-World War Two era.