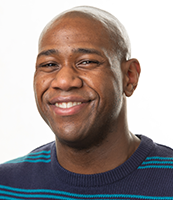 A native of Manning, SC and a Newberry College alumnus, Dr. Lesaine has taught in the Department of Sport Professions since August 2012. Before entering the classroom, he coached women’s basketball on the college level for eight years, including two stints at Newberry as a student assistant (2004-2007) and as a full-time assistant (2009-2012). As a college coach, he has been part of two South Atlantic Conference tournament championship teams (2006 and 2007) and coached in six consecutive NCAA Division II national tournaments.

Dr. Lesaine has received several campus awards during his tenure as a professor. He has been selected three times as NCSGA Professor of the Year (2015, 2016, 2021). He has also received the Dr. and Mrs. William S. Boyd Professorship for Excellence in Teaching (2016), the L. Grady Cooper Award for loyalty and dedication to Newberry College (2016), an Excellence in Teaching Award from the National Society for Leadership and Success (2016), and Campus Pastor’s Award for Outstanding Leadership and Service (2014).

In his spare time, Dr. Lesaine serves as a public address announcer for Newberry College athletics. He also officiates basketball on the high school, college, and semiprofessional levels.