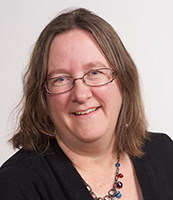 In fall 2020, after teaching chemistry since her arrival at Newberry College in 2002, Dr. Christina McCartha transitioned to her current role in Institutional Advancement.

As professor of chemistry, McCartha served as the faculty advisor for transfer students and for the College's chapter of the American Chemical Society. She worked with students to develop labratories for integration into the chemistry curriculum. As a precursor to her current role, she also served as departmental grant writer and principal investigator on a National Science Foundation (NSF) Noyce grant award.

As an undergraduate at the University of South Carolina, McCartha worked on synthesis of fluorinated camphor derivatives under the direction of Dr. John Dawson. As a graduate student, McCartha synthesized polyoxometalates and characterized them by X-ray crystallography and Nuclear Magnetic Resonance spectroscopy. She also investigated the catalytic activity and antiviral activity of polyoxometalates at Emory University under the direction of Dr. Craig Hill.

McCartha is a 2007 recipient of the South Carolina Independent Colleges and Universities' Excellence in Teaching Award; an inductee into the Who's Who Among America's Teachers; a 1989 recipient of the Emory University Women's Club Research Award; a 1984 recipient of the American Institute of Chemists' Outstanding Chemistry Undergraduate Award; and a recipient of numerous research and development grants.

McCartha is a member of Chapin Baptist Church and has four children: Crystal, Shannon, Jesse, and Grace.