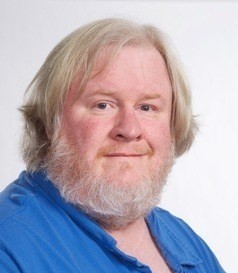 Born in Nashville and raised in the suburbs of Nashville and Cincinnati, Warren Moore has been at Newberry College since 2003. A medievalist by training, Moore’s dissertation is on the Seven Deadly Sins in pre-Shakespearean English morality plays. He is a regular contributor to the annual bibliography published by the New Chaucer Society and has presented at regional, national, and international conferences.

Moore’s first novel, Broken Glass Waltzes, was published in 2013 by Snubnose Press (Baltimore, MD), and his short fiction has appeared in venues ranging from The American Culture to Out of the Gutter, The Big Adios, and Dark Corners. One of his stories was selected recently for publication in Dark City Lights (Three Rooms Press, 2015), an anthology edited by mystery grandmaster Lawrence Block. Moore also performs as a songwriter and drummer for local garage-punk band The Berries, who released their first album on GoZombie! Records in 2013. He lives in Newberry with his wife and daughter.