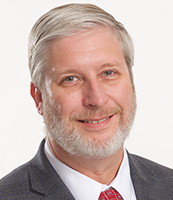 Parrish has 17 years of experience in higher education. He began his teaching career as assistant professor of Chemistry at Midland Lutheran College (2000-2005) in Fremont, Neb., moving to a position of the same rank at North Carolina Wesleyan College (2005-2006) in Rocky Mount, S.C.

Parrish joined Newberry College in 2006 as assistant professor of Chemistry and was advanced in rank to associate professor in 2008. He played a pivotal role in the development of the College’s Forensic Chemistry program and attracted more than $650,000 in instrumentation, grants and donations for the startup program.

In 2012, Parrish moved to the administrative arm of the institution to serve as associate director of Institutional Effectiveness and Assessment and a member of the president’s senior leadership team. During that time, he successfully led the College’s 2012 Southern Association of Colleges and Schools Commission on Colleges (SACSCOC) reaffirmation effort. He was appointed Vice President of Institutional Effectiveness and Strategic Initiatives effective Jan. 13, 2017.