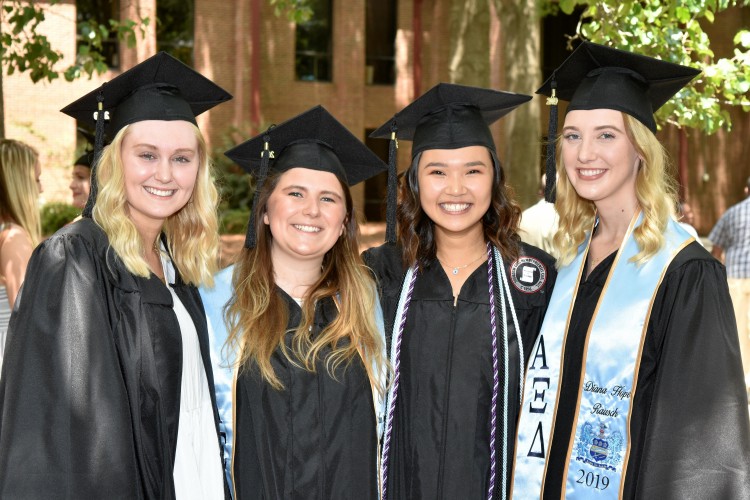 Newberry College hosted its spring commencement ceremony for the Class of 2019, celebrating the accomplishments of 139 graduates on Saturday, May 4, at 2 p.m., in Eleazer Arena.

“This happy occasion brings us together to celebrate the achievements and realized goals of this senior class,” said Newberry College president Dr. Maurice Scherrens during his remarks at the ceremony. “Seniors, in partnership with your professors and mentors, each of you has invested four years in an effort to cultivate your individual potential into singular accomplishment."

In keeping with the College’s practice of selecting students to give the commencement address, graduating seniors Mary E. Siebert and Sarah E. Reagin were selected for this honor. Mary E. Siebert graduated with a major in Sociology and Criminal Justice.

Sarah E. Reagin graduated with an Accounting major with a Business Administration minor.

“As we embark on our new steps after college, I want to remind you on all the steps we took to get here. In this room we are surrounded by people who have helped us take steps of all sorts. Our parents, who watched us take our very first steps. Our grandparents who helped guide us with their wisdom in any step taken. And, our friends with whom we stepped along the way. Thank you to each of you for making today possible.”

Each year, graduating seniors make a class gift to their alma mater. This year’s class gift is an iron sculpture in the classic Wolf N, which has been installed outside Kaufmann Hall.

The graduating class annually presents the Dr. L. Grady Cooper Award to faculty, staff or students who exemplify the loyalty and devotion to Newberry College that Cooper demonstrated during his long tenure as a professor of Religion and Greek.

Professor Wayne Kannaday  and  James Allen Salter, III  were selected for this honor. Kannaday, a professor of Religion, was recognized for classes that are practical and advantageous to students in their future careers. Salter graduated as a Political Science major. He is a Dean’s List student and Vice President of Omicrom Delta Kappa Honor Society. He has been involved in the College Wind ensemble, the Scarlet Spirit Marching Band, Jazz Ensemble and the Newberry College Singers. He serves as communications director for Rick Martin for South Carolina House and is a contributing writer for the Newberry Observer.

The Algernon Sydney Sullivan and Mary Mildred Sullivan Awards were established to honor one man and one woman of the graduating class who exemplify outstanding character and service to others, traits valued by Mr. and Mrs. Sullivan.  The awards were bestowed respectively on James Allen Salter, III and Sarah Elizabeth Johnson.

James Allen Salter, III has been active in the Newberry College Student Government Association, serving as Junior Class President and as the 2018-19 SGA Vice President. He also is founder of the College's chapter of Young Americans for Liberty.

Sarah Elizabeth Johnson is an Elementary and Early Childhood Education major and a member of the Summerland Honors Community. She has participated in Teaching Fellows, Newberry Education Society, Omicron Kappa Delta, and Sophomore Sojourners. She has also volunteered every semester with the Spanish Academy program at Newberry Elementary School. During her Junior year, Sarah completed a Muller Center Research Fellowship which established three Little Free Libraries throughout the city of Newberry. After graduation, Sarah plans to teach fifth grade at Saluda Elementary School.

The Dr. George B. Cromer Award was established by the Class of 1938 in memory of Dr. George B. Cromer, who served as Newberry College president from 1895 - 1904. The award is given annually to a graduating senior who exemplifies the qualities of academic excellence, leadership and personal integrity that Cromer demonstrated throughout his tenure. This year's receipient was Peyton Clark Hite. He was inducted into the prestigious Newberry College Bachman Honor Society. Each summer throughout college, he has volunteered to serve as a counselor at Palmetto Boys State, where he mentored rising high school seniors. Peyton plans to work at Laurens High School where he will teach and coach football.